Well this week has been a big, sucky one when it comes to losing beloved Hollywood royalty. First we lost Robin Williams, one of the funniest men alive. Sure, he overdid the mawkish (mork-ish?) sentimentality in some of his films, but he was a true comedic giant.

Then goes the Bogie-taming, Silver Screen Queen and all round goddess, Lauren Bacall. It’s a stereotype but they really don’t make ‘em like that anymore.

Not much to say that hasn’t already been said but, to paraphrase a certain animated Disney film: 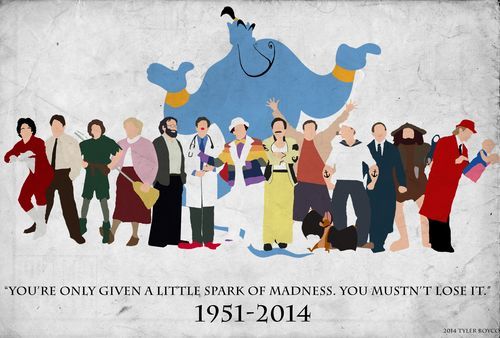 There’s a certain game app that features a certain braindead US socialite called Kim Kardashian that is currently making millions on the App Store. Celebrity ties aside, why is this game, which is famously awful by the way, dominating the download charts? It may very well be down to a new phenomena in social sharing that this blog calls the ‘viral oops’. We’re all doomed.

The Google Satellite experiment
Now THIS is brilliant. A Chrome experiment by Google Creative Labs that charts the 36 year journey of NASA’s ISEE-3 satellite. It’s, quite frankly, amazing. Here’s a lowdown on the whole story and here’s the website. Go be astronauts!

So… ‘Stelfies’ then?
The selfie is soooo July 2014. Get with it Gramps! The kids are over that. It’s all about ‘Statue Selfies’ nowadays. It’s the new craze sweeping the arts world and I’m trademarking the term ‘Stelfie’.

What to know what a pizza sounds like?
In the 2nd year of high school, I predicted to my teacher that, in the future, their would be a device that would allow us to listen to colours. He called me an idiot and went about teaching the class. Well… WHO’S LAUGHING NOW MR PERKS? EH?

Humin – changing the way we look at our contacts?
We’ve been following the development of Humin, an app that is determined to change the way we look at the contacts on our phones, since it launched its BETA version some 6 months back. It looks genuinely great and looks like it’s going to result in a seismic change in the way we manage our address books. Check it out.

Email etiquette for entrepreneurs
Regular readers of Prime8 will know we’re advocates of ‘plain English’. Business speak does not exist in this dojo, so kindly stick your ‘blue sky thinking’ up your box (that you no doubt ‘think outside’ of). Glad we’re not the only one’s who think like this!

GGA’s website of the week:
How do you make your clothing range catalog awesome? You do what G-Star Denim have done and lose obvious navigation and the usual ASOS-style layout of course! A brave approach that pays off rather nicely.

… and finally.
It couldn’t be anything else this week could it? Here’s Funny Or Die’s really rather lovely tribute to the late, great Mr Robin Williams.